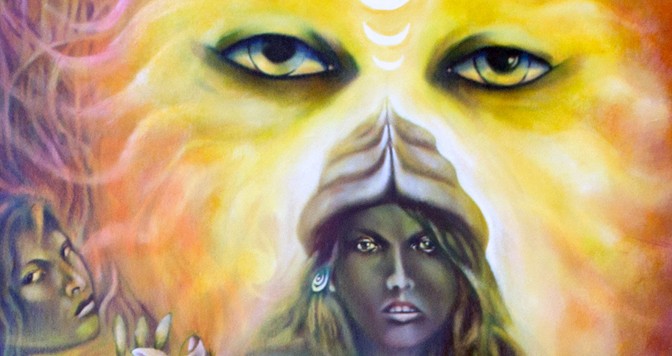 She the Flowering of Ishtar, Ishtar Painting

Ishtar Painting. She The Flowering Of Ishtar, oil on canvas, 36 inches by 72 inches, completed in 2012

My Ishtar painting depicts the return of the goddess from the underworld through the intervention of Enki.

At the bottom of the picture is Ereshkigal in her domain the underworld, with her nightside companions.  On the right is Dumuzi Ishtar’s consort who walks into oblivion, the price for her return to life.

Damuzi is representative of the male condemned to a dark colorless underworld because he fails to recognize and express his feminine aspects. Illustrated symbolically through his cowardice in not assisting  the Goddess to return  from the underworld.

Ishtar herself is the central figure with her totem animal the lioness.  Freed from the underworld and empowered by it she returns to her own realm.

The back ground of the painting is Enki, the light which brings release.

This painting is a visual analysis of the magical formula Sixteen. This formula is understood through a specific arrangement of the QBL Tree of Life.