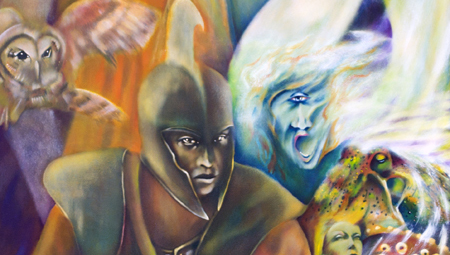 I originally finished The Odyssey in 2008 but then reworked it in the fall of 2011 for my show “God Factory”.

Philosophy Behind the Painting

The Odyssey I believe is the greatest story ever told because it is  an allegoric psychological portrayal of the unfolding drama of our lives. We are born and grow in the comfort of our family and then quite suddenly in our teens are ripped out of this environment to go to work or college, for Odysseus, it was fighting the Trojan War.  After many years we  achieve successful lives, the defeat of Troy.  Now begins our journey of introspection and our return voyage home.

After many adventures and delays, generally of our own making, is well summed up in the words of T.S. Elliott, “We shall not cease from exploration. And the end of all our exploring will be to arrive where we started and know the place for the first time”.

In the back ground of the picture are the two antagonists, Pallas Athena and Poseidon, who are the interplay of cosmic forces: fire and water. In center stage stands Odysseus himself, armed and poised ready for any eventuality.  On his belt is the image of the Trojan horse, his inspiration that brought an end to the Trojan war. Above him hovers the totem animal of Athena, the owl, who transmits Athena’s wisdom to Odysseus. Around him in the realm of Poseidon we see the images of his lost comrades which shows that only the true, inner part of ourselves can return.  Our egos and positions are stripped away on our journey home.

Daemon Watcher in the Wood

The following poem Ithaca by Constantine P. Cavafy I discovered after a visit to Ancient Olympia. I came across it quite by chance and was struck by the similarity of its image to my own.

When you set out for Ithaka

ask that your way be long,

full of adventure, full of instruction.

The Laistrygonians and the Cyclops,

angry Poseidon – do not fear them:

such as these you will never find

as long as your thought is lofty, as long as a rare

emotion touch your spirit and your body.

The Laistrygonians and the Cyclops,

angry Poseidon – you will not meet them

unless you carry them in your soul,

unless your soul raise them up before you.

Ask that your way be long.

At many a Summer dawn to enter

with what gratitude, what joy –

ports seen for the first time;

to stop at Phoenician trading centres,

and to buy good merchandise,

mother of pearl and coral, amber and ebony,

and sensuous perfumes of every kind,

sensuous perfumes as lavishly as you can;

to visit many Egyptian cities,

to gather stores of knowledge from the learned.

Have Ithaka always in your mind.

Your arrival there is what you are destined for.

But don’t in the least hurry the journey.

Better it last for years,

so that when you reach the island you are old,

rich with all you have gained on the way,

not expecting Ithaka to give you wealth.

Ithaka gave you a splendid journey.

Without her you would not have set out.

She hasn’t anything else to give you.

And if you find her poor, Ithaka hasn’t deceived you.

So wise you have become, of such experience,

that already you’ll have understood what these Ithakas mean.