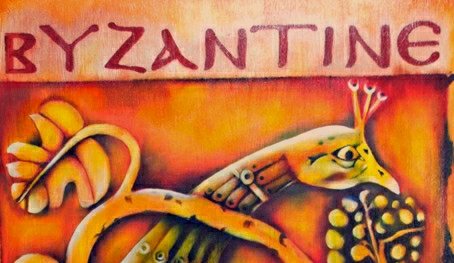 Byzantine a Byzantine Museum of Argos

My painting Byzantine is a rendition of a carving I first came across in the Archaeological Museum of Argos Greece. It has since been moved and is now in the recently opened Byzantine Museum of Argolis.  Opened in March 2017.

The original templon closure slab with a relief representation of a peacock pecking grapes is from the church of the Virgin Mary, Larissa Castle, Argos, 2nd half of the 12th century.

Byzantine sculptures often involved symbols, such as vines, alpha and omega symbols of Christ, the ship of the church and the four rivers of the four Gospels. Sheep and lambs represented disciples, doves represented the soul, and the peacock symbolized immortality. The Byzantines associated sculptures that depicted the saints, the Madonna and the Redeemer with pagan cults, so they avoided accurately depicting figures in sculptures.

The Byzantines often used marble when carving catacombs and cemeteries, and sometimes used marble for statues. Church pulpits often had marble reliefs. Sculptures more related to religious figures were often made using precious metals, such as gold, silver and bronze. Because of the use of precious metals, invaders often destroyed them to extract the metals.

See Characteristics of Byzantine Sculpture by Chuck Robert for the complete article.

Born in Loughborough, England, in 1947 and growing up in Coventry he was inspired from an early age by the French Symbolist painters of late nineteenth century France,

These artistic influences, in conjunction with his own esoteric upbringing and practical experiences of mythology and dream control, form the matrix, a collective oeuvre upon which his paintings and writings are an extension.

Using diverse creative media, whether  painting or writing books, Williamson endeavors to develop techniques that materialize the sensuous dreaming experience into the language of the waking world.  Aspiring to reintroduce mystery and ambiguity back into the adventure of human existence through the creative process, encouraging artistic audiences towards “living effulgent and invigorating lives, revitalized from the secretions of our subconscious.”

Voudon Spirit a work created in the same period

Roger Williamson is the creator of Tarot of the Morning Star deck and the author of The Sun at Night.