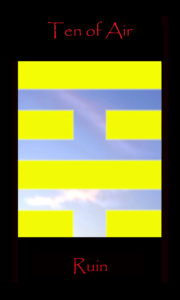 Ten of Air is Ruin, as in complete and utter annihilation of achievements and hopes. Any possibility of redemption or escape from its influence will require taking a tangential, out of character action, initiating a crack in one’s personal space-time signature.

Propelled through this fissure, you will be liberated from this card’s painful influence, discovering yourself open to new opportunities.

A concentration of immense self force, free from the fear of your present situation and consequences of future action, is required to escape this situation’s event horizon¹.

It requires going inward to woo and embrace your daemon in a magickal machine of self love² and from this embrace to ride the trajectory of your new self.

This new self is the creature you birthed through intercourse with your daemon to escape the gravitational drag of your past.

Consider this card’s parallels to the formula of major arcana cards Tower and Emperor.

Tarot Ten Air and each of the Minor Arcana cards numbered Ten express attributes of Malkuth, the tenth and final sphere on the QBL Tree of life, whose title is Kingdom

There is no  planetary correspondence allocated to Malkuth, the sphere is ascribed to its corresponding element Atziluth Fire, Briah Water, Yetzirah Air and Assiah Earth.

The four Tens symbolically articulate the psychical characteristics of their corresponding element, a fixed completed force or conclusion, elemental energy taken to its extreme.

Ten of Air is allocated to the third decan of Gemini whose planetary attribution is Sol. The Malkuth Sol combination in Air is the formula for Ruin.

With Ten Air we witness the outcome of consistent analysis taken to an extreme. This card permeates a lack of emotion and synthesis. It is analysis for the sake of analysis, initiating malevolent perspective to enter halls where once amiable influences ruled.

Here is a condition achieved when only analysis has been applied. In conversation with another, this influence is expressed in antagonistic speech with a desire to bring unhappiness.

There is much intelligence present here but it is directed toward bringing discord, pain and suffering. It is disintegration through moral and/or mental dysfunction.

The Inspirational and intuitive qualities of Gemini, as seen in Major Arcana Card Lovers, are here subtly directed toward negative ends.

The influence of Malkuth and Sol in Gemini are indicators of a painful end to ambitions, relationships and expectations. Reason has become infected by discord, divorced from emotion, logic and circumspect judgement, so as to become a victim or instigator of its own character.

Either way it illustrates a fundamental failing within oneself. We might go as far as to say this card falls under the influence of sadism or when applied to self, masochism.

This is witnessed when seeking and following through with revenge upon another, we also inflict pain upon ourselves.

The character qualities of the court card Queen of Water are those best suited to receive and translate the specific ancestral voice of this decan. This Queen expresses quiet meditative qualities that can smooth off the rough edges of Ten Air and bring an element of grace which otherwise would be absent . She is kind and generous, tempering the malicious drives of Ten of Air . She represents a personality quietly going forward in her desires, although not necessarily conscious of the needs of others. 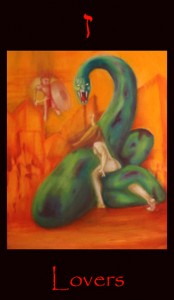 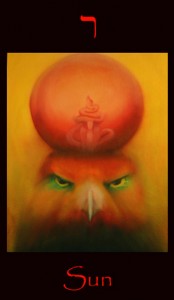 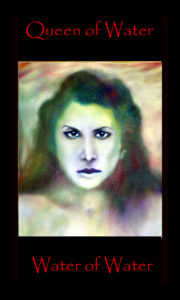 In this example Ten of Air, the conjunction of major arcana cards Gemini and Sun, corresponding to Gemini and Sol are the specific signature of this decan and will be projected through the personality type represented by the Queen of Water. The elemental quality of Queen of Water corresponds to Water of Water.

It is through experiencing and projecting her personality that we can resolve the root influence within ourselves that was the cause for our having to experience the qualities of Ten Air.

¹A theoretical boundary around a black hole beyond which no light or other radiation can escape.

A point of no return

² Be aware this is the final decan of Gemini, the astrological sign overseen by major arcana Lovers that illustrates the formula.