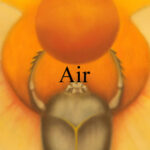 Tarot Decan Cards cards are numbered Two through Ten and represent activity of objective influences, how we perceive phenomena outside of ourselves and the consequences of this upon our inner being.

These cards are divided into four groups commonly called Suits.

Fire also called Wands or Staves. Process of burning up, moving from one form of existence to another

Earth also called Pentacles or Coins, Representations of what is considered “as is”.

Tarot Decan Cards Minor Arcana of each tarot suit are divided into three groups of three cards, corresponding to the astrological Cardinal 2,3,4, Fixed 5,6,7 and Mutable 8 ,9,10, signs.

Each group of three falls under the influence of a Major Arcana card corresponding to their astrological sign.

The Major Arcana card represents an aegis, an archetypal voice for the three Minor Arcana cards it oversees. What Julian Jaynes refers to as ancestral voices or messages of god’s in his theory of bicameral mind

As an example. Should Two of Fire appear in a reading and its relevance elude the reader, then the readers mind should project on to the specific Bicameral Signature combination of the card. In this example they are Emperor and Tower, Aries and Mars, speaking through the personality type Queen of Fire, Water of Fire, for an interpretation of the conundrum.