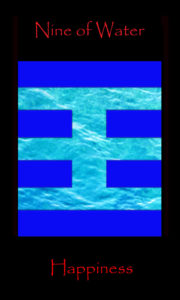 Happiness is the title of Nine of Water and each of the Minor Arcana cards numbered nine exhibit qualities of support and justification. This is because nine is the number of Yesod,  whose title is foundation on the QBL Tree of life.

The planetary quality of Yesod is the Moon and each of the minor arcana cards numbered “Nine” will express qualities of a Lunar nature. This quality will be colored by a cards elemental suit: fire, water, air and earth and its associated planetary decan. In the case of Nine Water, this planetary decan is Jupiter in Pisces.

Astrology, defines the Moon as reflective and responsive, representing deep personal needs to achieve security. This influence is witnessed in our spontaneous and instinctive reactions to life situations. Creativity and imagination are also stimulated due to the combination of Moon and the suit of Water.

Moon is the general archetypal voice behind the Eight, Nine and Ten of Water because of this, all the above mentioned traits will be intensified.

Happiness, the title of Nine of Water is the second decan of the astrological sign Pisces. This second decan of Pisces is ruled by Jupiter allocated to major arcana card Wheel.

The effect of the Jupiter Pisces combination provides optimistic motivation to what you desire.

The quality of foundation derived from Yesod creates a sense of security justifying the cards title Happiness. This title is indicative that ambiguity and threat appear to have been eliminated.

With astrological sign Pisces, we are approaching the conclusion of a cycle because Pisces is the final sign of the zodiac.

The closing of a cycle is the foundation of a following cycle. This is endorsed in this card because of the influence of the Yesod character.

Nine Water radiates an optimistic view of the future, the coming new cycle,  grounded on achieved stability as a result of the Jupiter influence. A sense that all will be well, the root of Nine of Waters title Happiness.

Because of the strong sense of confidence and well being represented by this card there is always a possibility of a preoccupation with oneself.

Jupiter also exerts its influence through introducing traits of not being satisfied with limited ideas or achievements thus giving an impression of high mindedness. This can be perceived by others as self assumption and vanity.

However,  keep in mind as with most things in life, not all is perhaps what it seems and Nine Water is no exception.

Major arcana card Moon warns us we need to be cautious when entering new territory.

In tarot card Moon we witness “fear,” a result brought on by the loss of bicameral mind and the appearance of consciousness. No longer hearing voices of ancestors and gods we feel abandoned.

Tarot court card Knight of Water Knight of Cups is the human personality type behind Tarot Eight and Nine of Water. This is a personality image best suited to exploit the appearance of Nine Water to one’s advantage. His dreamy and easy going persona detracts from any personal traits of self absorption.

For greater clarification of Nine Water’s impact upon a tarot reading, listen for the specific bicameral voice of the decan. This voice is  triggered by the combination of major arcana cards Moon, corresponding  to Pisces, and Wheel, corresponding to Jupiter Take note of the message they relay through the personality type represented by the Knight of Water.