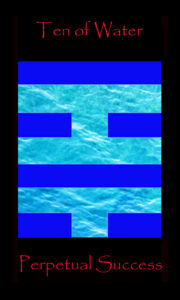 Tarot Ten Water, Ten Cups. and each of the Minor Arcana cards numbered Ten  exhibit qualities of accomplishment a fixed completion of a project. Whether perceived as positive or negative will be determined by surrounding cards. This is because Ten is the number of Malkuth whose title is Kingdom, the final sphere representing the physical universe on the QBL Tree of life.

The planetary quality of Malkuth  is the Earth itself and each of the minor arcana cards numbered “Ten” will express qualities of a grounding nature, an achievement whether good or bad, colored by a card’s elemental suit: fire, water, air and earth and its associated planetary decan. Planetary decan of Ten Water, is Mars Pisces.

In Astrology, the energies of Earth are conservative and practical, conducive qualities for  coming into being. The influence of the Earth is a crystallization of our journey or work into a physical reality: a point of focus where all becomes clear within a matrix of  life situations.

The Earth is associated with our physical endeavors and abilities, and the influence of the tarot Water suit amplifies these traits into a creative pleasurable outcome expressed  by the cards title, Perpetual Success.

The archetypal voice behind the Ten of Water is the major arcana card Moon, a card of fear and hidden dangers. Because of this, we need to be aware that no situation is permanent and that it is  in our best interests to follow the path of correct action as we move forward weaving our life’s rich tapestry.

A reason for the fear element to be associated with major arcana Moon is because the cards path, Hebrew letter Qoph on the QBL Tree of Life, is a leap from Malkuth 10 to Netzach 7, in effect traversing all the paths and spheres in between so experiencing their teachings and experiences in one monumental leap.

Perpetual Success is the title of the tarot card corresponding to the third decan of astrological sign Pisces and this decan of Pisces is ruled by Mars. The effect of the Mars Pisces combination provides a motivated desire for artistic expression, not for worldly gain, but for catharsis, not just for one’s self,  but also for others.

With the appearance of this card we sense we are an embryo within the shell of an egg at the point of exploding out of our protective environment onto the stage of a greater world. Consciousness evoking memory and with memories comes our ability to learn from our past to impact on our future. The card represents both euphoria and apprehension that comes with challenges of new opportunities of advancement. We may fear we are not up to the job but know that not taking the challenge leads to stagnation and death. The natural world teaches us that life is not stationary but expansive.

The egg shell symbolically represents accumulated achievements of previous cycles hardened into a protective mindset to allow our gestation for becoming a new being in a new stage of development.

Here is the danger in this card, preoccupation with achievements is at the expense of ignoring where we need to improve. This attitude inevitably leads to a comfortable environment that we are reluctant to move beyond tantamount to a self imposed prison, however comfortable a prison it is still a prison. For our continuing progression the shell has to be perceived as an adventure, a challenge to our ongoing journey that only “we” are bequeathed to accomplish.

The embryo is the vital burning self anxious to be born and move forward proving its right to exist.  The violent planetary ruler Mars assists in this escape. See Major Arcana card Tower.

In many ways Ten of Water is an overview of “coming of age stories” where there is no conclusion and where death is synonymous with birth, a constant state of becoming.

Perpetual Success means having the courage to follow your desire for the sake of following it, unimpeded by our own material obsessions or the restrictions of societies expectations we may live within.

With the third and final decan of astrological sign Pisces, we are at the conclusion of a cycle because Pisces is the final sign of the zodiac.

A completed cycle is the Mother of the following cycle emphasized in this card through the influence of it’s Malkuth ten character.

Tarot Princess cards are allocated to Malkuth and with each Princess we witness a vehicle having the potential to receive the seed of the future and become a mother through becoming a Tarot Queen giving birth to the following cycle.

Queen of FIre is the personality type associated with Ten of Water. While often radiating the delicacy of a rainbow, if opposed she can express the aggression of a lioness in relentless pursuit of her thirsts. With this Queen as our aegis we capture the personality formula supreme for birthing ourselves through membranes of mediocrity and baggage into any future we can perceive for ourselves.

The Tarot of the Morning Star deck depicts these qualities through the simulacrum of Sumarian goddess Ishtar but she could be equally depicted as Ancient Greek Pallas Athena springing fully armed from the brain of Zeus.

For greater clarification of Ten Water’s impact upon a tarot reading, listen for the specific bicameral ancestral voice of this decan which is the combination of major arcana cards, Moon allocated to Pisces and Tower allocated to Mars projected through the human personality type of the Queen of Fire and reflect on the message you receive.