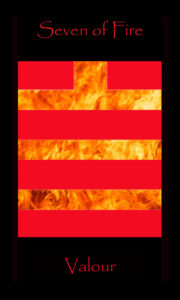 Tarot Seven Fire and each of the Minor Arcana cards numbered Seven, express attributes of Netzach, whose title is Victory, the seventh sphere corresponding with Venus on the QBL Tree of life.

Tarot Seven Wands, Fire is allocated to the Third decan of Leo whose planetary attribution is Mars.

A Sun Mars combination in Fire indicates an inflammatory attitude in achieving one’s ambitions. It is an expression of frustration to difficulties in expanding on the accomplishments won with Six Fire.  The Venus component adds an idealistic romanticising element resulting in the cards title of Valour.

Knight of Earth expresses personality qualities that exhibit patience in material undertakings. This earth influence calms the fire quality of the card to avert sudden and brutal action.

The above is paramount for ensuring the negative qualities of the card do not run out of control, resulting in irreversible situations.  Negative traits of this card can lead to avarice, apprehension, or cowardly behaviour.

These are personality traits expressed by the Knight of Earth because he corresponds to Fire of Earth, Earth bringing practicality and physical exertion.

.In this example of Seven of Fire, the conjunction of major arcana cards Strength and Tower, corresponding to Leo and Mars, are the specific signature of this decan and will be projected through the personality type represented by the Knight of Earth whose elemental quality is Fire of Earth. 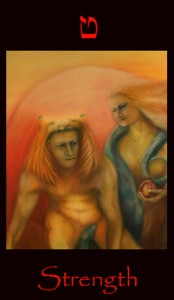 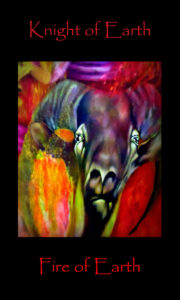 When the Three decan cards of any given sign are observed as a series they can tell a story that enriches our understanding of the astrological sign of which they are components.

Through Strife we can achieve Victory by which we exhibit Valour through having the courage to do what is right. 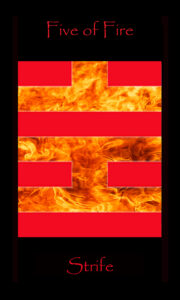 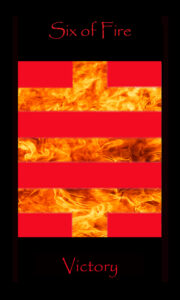 It is a worthwhile exercise to work through all decan sets falling under specific astrological signs in this manner to create a mnemonic.