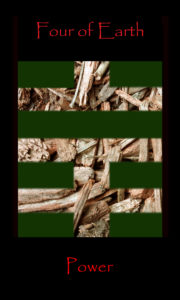 Third decan Capricorn corresponds to Four Earth, Four Pentacles and each of the Minor Arcana cards numbered Four express attributes of Chesed, the fourth sphere on the QBL Tree of life, whose title is Mercy.

The planetary correspondence of Chesed is Jupiter and each of the minor arcana cards numbered “Four” exhibit this astrological body’s quality colored by their corresponding elemental suit of  fire, water, air or earth.

These four suits correspond to the four worlds of the QBL: Fire: Atziluth Water: Briah Air: Yetzirah and Earth: Assiah.

The card Four Earth is allocated to the third decan of Capricorn whose planetary attribution is Sol.

Four Earth does indicate success in material matters but these achievements are solitary, they fail to develop into anything beyond.  Sun in Capricorn exerts its conservative influence which is reluctant to change and has a preoccupation to hoard and protect what it believes it owns. The expansive qualities of Jupiter are repressed into a self perpetuating system that fails to look beyond itself for inspiration and originality.

An initial superficial study of this card encourages belief we are successful in our practical pursuits and objectives, for this reason we must show caution. The card’s negative aspect of insidiously radiating saccharin vibrations that leech onto our complacent thinking tendencies make us believe we have achieved our goal when in reality we are only part way along our journey.

Four Earth is an indicator we have been successful in an aspect of our life, what it doesn’t explain is that we now have to optimize that success by risking losing it to advance into greater areas of experience.

This expansive characteristic is derived from the Jupitarian backdrop influence corresponding to Four. The combination is a fine example of not taking a card’s outward meanings at face value. Each card is a curtain, a curtain we need to look behind to discern what is really at play and what it is we need to hear.

The image of the court card Prince of Air depicting Orpheus and Eurydice illustrates the hazard of Four of Earth. Being sidetracked or looking back prematurely before completing objectives results in failure to achieve them resulting in our dissatisfaction.

This personality type Air of Air can indicate lack of focus because of scattered thinking, or being too easily side tracked, moving on to new projects or losing interest in projects before they have been completed. On the positive side this personality type encourages brainstorming for seeking resolution of conundrums.  Successful brainstorming is usually achieved through having an initial core focus. Four of Earth can be that focus when it is understood that it is not an end but a process.

In this example of Four of Earth, Four of Pentacles is the conjunction of major arcana cards Devil and Sun, corresponding to Capricorn and Sol. They are the specific signature of this decan and will be projected through the personality type represented by the Prince of Swords. The elemental quality of Prince of Air corresponds to Air of Air.

Each of the elemental Prince court cards correspond to the Air aspect of their elemental suite.