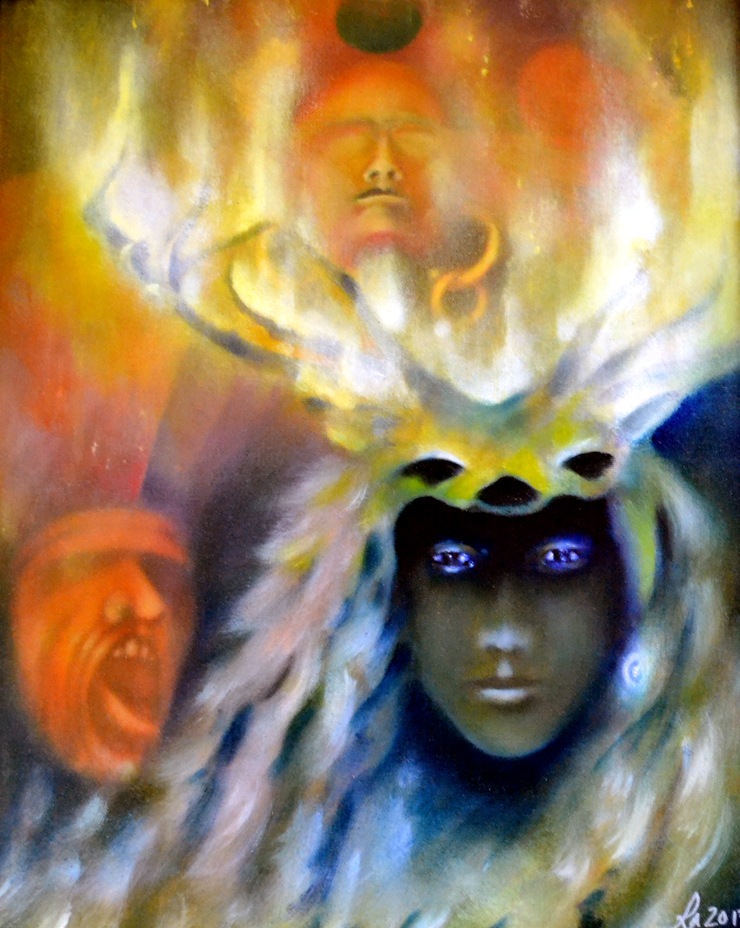 Doth all the winter-time, at still midnight,

Walk round about an oak, with great ragg’d horns;

And there he blasts the tree, and takes the cattle,

And makes milch-kine yield blood, and shakes a chain

In a most hideous and dreadful manner.

You have heard of such a spirit, and well you know

Receiv’d, and did deliver to our age,

This tale of Herne the Hunter for a truth.

— William Shakespeare, The Merry Wives of Windsor
Margaret Murray in her book, God of the Witches,  suggests that Herne is a manifestation of Cernunnos, the Celtic horned god.However because Herne is found only in Berkshire, and nowhere else he is considered a local god and could be the local equivalent of Cernunnos.In the Early Middle Ages, Windsor Forest came under the control of the Saxons who worshiped their own pantheon of gods.  One of these was Odin who hung at one point from a tree. Odin was also known for riding through the sky on a Wild Hunt of his own.Herne is depicted wearing the antlers of a great stag. He is the god of the wild hunt, of the game in the forest. Herne’s antlers connect him to the deer, which was given a position of great honor because killing a stag could mean the difference between survival and starvation.Herne was considered a divine hunter, and was seen on his wild hunts carrying a great horn and a wooden bow, riding a mighty black horse and accompanied by a pack of baying hounds. Mortals who get in the way of the Wild Hunt are swept up in it, and often taken away by Herne, destined to ride with him for eternity. He’s seen as a harbinger of bad omen, especially to the royal family. According to local legend, Herne only appears in Windsor Forest when needed, such as in times of national crisis.