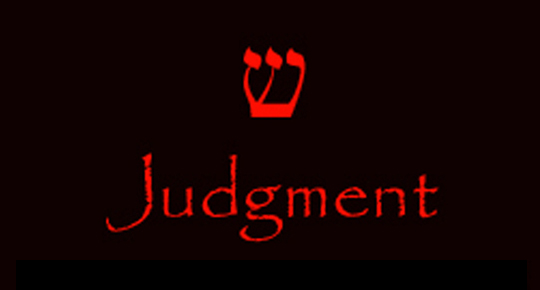 For Judgment I have used the climax of the Cain and Abel story as the image for my interpretation because it illustrates the moment of taking an irreversible step by an action made or a word spoken that can never be taken back.

The card reminds us that we need to think before we act or speak. Modern commentators typically assume Cain’s motive was jealousy due to God rejecting his offering, while accepting Abel’s.   Some ancient exegetes suggest something even more sinister lay behind the killing.  They suggest the motive involved a desire for the most beautiful woman. According to Midrashic tradition, Cain and Abel had twin sisters whom they were to marry.

The Midrash states that Abel’s promised wife Aclima was more beautiful. Since Cain would not consent to this arrangement, Adam suggested seeking God’s blessing by means of a sacrifice. Whomever God blessed would marry Aclima. When God openly rejected Cain’s sacrifice, Cain slew his brother in a fit of jealousy. We can interpret the story to mean the rise of the conscious man depicted as Cain who makes a cognizant decision to slay the more primitive man, Abel.

Cain has become aware and become a decision maker.  By taking life into his own hands he is no longer dependent on God, Gods or the whims of nature.  Through his action Cain has become resurrected as an  empowered and accountable individual.  More