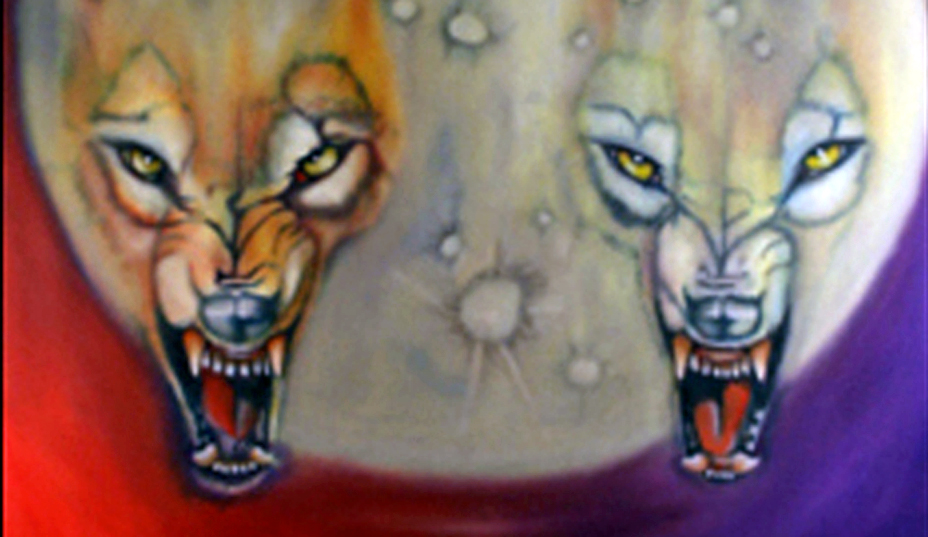 When referring to a cycle within the context of the following description, we must remember we are the cycle within what appears to be the sphere of the cosmos.

Because Pisces is the final sign of the zodiac, it represents the closing of our annual journey through the astrological signs. Tarot Moon, the card corresponding to Pisces, therefore graphically illustrates this closing of a cycle.

At this stage of the sequence we are witnessing the dissolving of one system into another. This is not recycling as in duplication but a  move into a new and original sequence of experiences.

The wolves in the foreground of the card, who through their mastication of the old cycle, create a new substance to be used in the next cycle. Elements of the old cycle are retained, but readjusted as memories and dreams for use in the new creation.

When viewing this card as the close of a physical lifespan the forces depicted by the wolves are the release of what will be guiding substances for the new, such as subconscious disturbances. Elements of the old cycle, such as physical components, are returned to the physical realm once more to be recycled as temporary vehicles in the continuing adventures of the cosmos.

The red and blue colors of the background are opposite ends of the color spectrum symbolizing a complete sequence.

For these reasons, tarot card Moon is often associated with fear and dread because it symbolizes our entry into new and original territory. Here in the realm of the Moon we are privy to the guidance of Gods, ancestor spirits and past life experiences that speak out of inner darkness to warn, advise and guide. Tarot Moon and Pisces therefore represent a solvent.

Through a study of the three decan cards that the Moon oversees we realize this period has the potential to be an optimistic view of change leading to happiness for the future.

This view is strengthened by a study of the QBL Tree of Life.  Tarot Moon on the QBL Tree connects the sphere Netzach, Victory to the sphere Malkuth, the Material World. This can be read as victory of the material world or success in an objective meaning a successful outcome.

Everything that exists eventually becomes the stuff of memory and loss resulting in life appearing to be a sequence of momentary experiences creating a collage of physical existence.

The Hebrew letter Qoph, corresponding to this path, means “back of head”  symbolizing the subconscious mind, a fitting thought for Tarot Moon

Major arcana card Moon is the archetypal voice behind the Eight Nine and Ten of Water minor arcana cards. In the case of irresolution of a decan minor card’s message, allow your mind to fall back upon the corresponding Major Arcana card behind it.

The image of the tarot card Moon is taken from the Tarot of the Morning Star deck.