The painting was created by covering the whole surface in blue paint and then removing unwanted paint with a rag to reveal the image. Final detailing was executed with a brush. 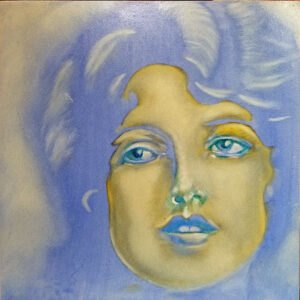 Portrait Blue Dream is from a series of paintings depicting the phenomena of spirit evocation. See A Spirit. and The Religion of Dream

The painting falls under the general heading Fin de Siecle which is a French phrase meaning ‘end of century’ and is applied specifically as a historical term to the end of the nineteenth century and even more specifically to decade of 1890s.

As such it is an overall term embracing symbolism, decadence and all related disciplines which reached a peak in 1890s. Although almost synonymous with other terms the Fin de Siècle however expresses an apocalyptic sense of the end of a phase of civilization. The real end of this era came not in 1900 but with First World War 1914.

Other examples of this phenomena are related in Lore of Prosperine by Maurice Hewlett chapter A Boy in the Wood.