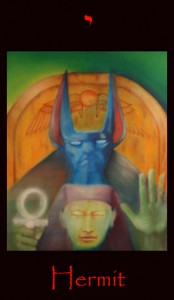 Close examination of the card reveals the eyes of the Hermit are closed, symbolizing introspection and seeking answers to questions from within. The Hermit desires resolution to uncertainty from learned experience in contradiction to relying on those of society, media and social convention.

This inner voice, according to Julian Jaynes in his book The Origin of Consciousness in the Breakdown of the Bicameral Mind, was the voice of Gods and ancestors commonly listened to by our ancient forebears.

While within this inner world, the physical body of the Hermit is protected by the jackal headed figure in the background. This entity is a fusion of the Ancient Egyptian deities Wepwawet and Anubis, the wolf and the jackal.

The Ancient Egyptian title for Wepwawet is “Opener of the Ways” and that of Anubis “Foremost of the Westerners”.

The title “Opener of the Ways” suggests guidance and rite of passage. The epithet of Anubis as “Foremost of the Westerners”, the West being the Land of the Dead, is indicative of a resting place for mortal remains, embalmed memories. We can construe this as implying Anubis is guardian of the abandoned physical body.

In regard to an interpretation of Hermit, this is only a temporary abandonment of the physical body brought about by travelling the tunnels of the subconscious.

For my depiction of Hermit in Tarot of the Morning Star, the focus of guidance, the Hermit’s lantern, is represented by the Ancient Egyptian symbol of life, the ankh. The ankh, held in the Hermits right hand, is a mnemonic signaling that life’s guide for travelling the less trodden path is reason and logic, the light of life’s earned experiences.

With this statement, we are witnessing a dynamic of the waking world impacting on the subconscious to evoke a hybrid that will be an explanation of a dilemma.

To sum up, the card is a depiction of the process of self healing, the path of the shaman.

With these points in mind, the qualities represented by Virgo and the Hermit can be discerned. 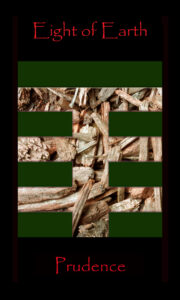 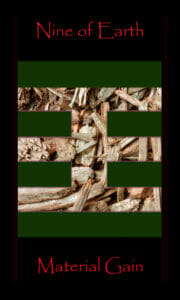 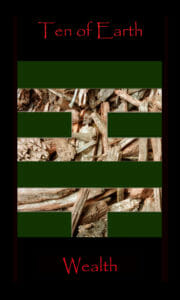 Answers provided by the Hermit will be understood through the personality type Knight of Earth for Eight and Nine of Earth and personality type Queen of Air for the Ten of Earth. See the diagram Tarot Wheel for an illustration on the interrelationship between the three levels of the tarot, Major Arcana, Court Cards and Minor Arcana.

Tarot of the Morning Star Deck available from Amazon