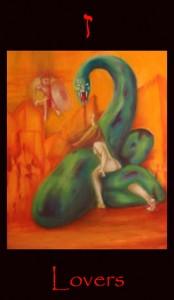 Inspiration for my depiction of the Lovers card came from Paolo Uccello’s  painting of Saint George and the Dragon.

On first view, of Paolo Uccello’s painting it appears the male hero is liberating the maiden from the dragon.  However, on closer scrutiny,  it can be seen that the maiden holds and leads the dragon by the chain around its neck.  The dragon is not her jailor but her pet.

The maiden is the symbolic stimulus for overcoming fear for she inflames the hero to action liberating him from what holds him back as represented by the dragon.

It is not the maiden who is liberated but the male when his desire for her is strong enough to overcome his fear.

Nature tests us to see if we are worthy enough to win what we desire.

From Howling at the Sky

The Lovers card illustrates the state of the Nile valley when the sun is in the sign of Gemini.

Gemini is the sign preceding Cancer on the wheel of the zodiac.  It is in the sign of Cancer that the star Sirius rises with the Sun to announce the inundation of the Nile, which will return life to the land.  Therefore, when the Sun is in Gemini, the land is at its most barren.  For the ancient Egyptians, this would have been the last sign of their zodiac.

The first sign is Cancer, the place of rising of a new current, announced by the ascension of the star Sirius in conjunction with the Sun.  If we look at the Lovers card, we see visible nature depicted as a woman, the goddess Isis, in the last throws of life.

Rising from the barren landscape is a great serpent, poised to devour what remains of nature.  This serpent has, over the course of the year, consumed all of the life-giving water and reduced the land to desert.  All would be lost if it were not for the figure in the top left of the card.  Here is the adventurer, with sword raised, poised to slash open the serpent who will release the waters of the inundation, realized in the sign of Cancer and illustrated in the tarot card of the Chariot.  The figure of the adventurer is the constellation of Orion, often referred to as the hunter.  In one image, this card is allegorizing the climax of the quest, the searching for the source of life.

In periods of our lives when we become bereft of ideas or emotion, we need to call on our intuitive ability, the energy represented by the Lovers card.  The card illustrates the comparison of these barren intervals in our lives with the Nile valley prior to the inundation.

Our expectations are restrained and appear to be drained of vitality, placing us in a state of inertia.  However, the thrill of new possibilities can be liberated by tapping the current of life, the serpent, and by our passion to live, the adventurer, the constellation of Orion.

In experiencing this card in barren periods of our lives, we have at our command the tool for unlocking the infinite prospects open to us.  Through intuitive ability, we realize that we can be more than what we presently are.

My rendition of The Lovers tarot card defines in its imagery the clash of modern consciousness rising within humankind, thus preempting the automatic responses of previous generations.

Prior to approximately 1000 BC, bicameral mind theory is of the opinion that humans responded robotically to the impulses of nature. Heard as ancestral voices these impulses over time developed into the voices of gods.

The serpent featured in the card is raw nature. It is the source of hallucinated ancestral voices that converse with the maiden, our receptive creative selves.

She makes the ancient sign of welcoming or honoring to the serpent, her lover. This is not a sign of worship, but a greeting of equals.

Perseus, the figure descending from the sky, is the appearance of modern man and a new way of thinking brought about through an increase of emphasis of logical thought.

His drawn sword, symbolic of a pen, represents the origin of writing, a radical stimulus culminating with the end of the old ways symbolized by the serpent.

Hallucinated conversations, exorcised through writing, negated our ancestors need to listen to personal impulses and needs, thus causing a gravitation to reliance upon another man’s opinion over our one’s own revelation.

The  desert background is the state of our lives through the impact of no longer trusting, listening, or hearing the vocalization of nature’s ancestral voices. It is symbolic of  the loss of love.

The serpent becomes a threat because it is now the misunderstood voice of natural force.