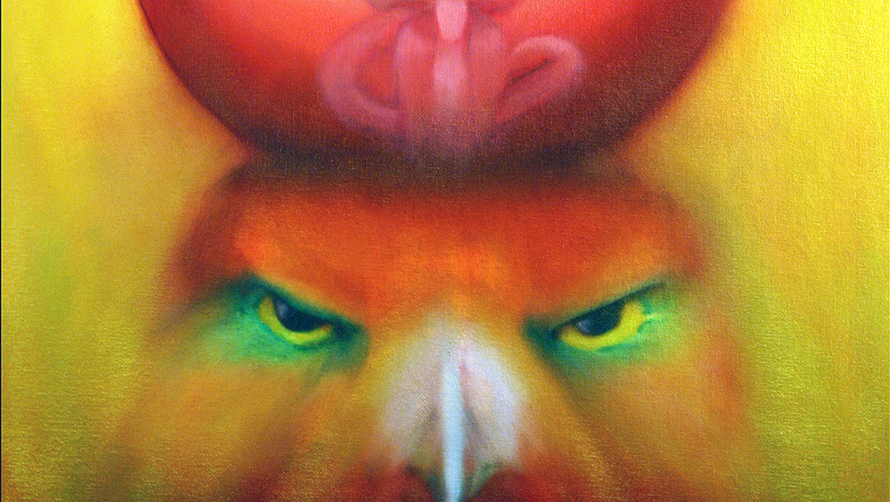 Tarot Sun from Tarot of the Morning Star. A guide encouraging you to be awake and to be alive.

Ra the entity depicted in Tarot Atu 19 corresponding to the Hebrew letter Resh, meaning head on the QBL Tree of Life, allocated to the path of the Sun numerical value 200.

This is the Sun which draws out life as symbolized by the celestial orbs journey through the signs of the zodiac.

Ra in the painting is depicted as a hawk crowned with a solar disc, god of the Noonday Sun. A creator God because whatever enters his sphere of influence becomes animated. However, we need to understand he doesn’t necessarily create something that was not previously there but brings to awareness something that was present but hidden. This in the theory of astrology is the Sun awakening an astrological sign through the act of passing into it and making it active.

Each night Ra recreated himself within the primal chaos of the underworld. With this concept we are witnessing some of the first concepts of heroes rites of passage. Later texts depict mortal adventurers forged by and through chaos to become reborn as heros. Hero’s who might even become gods.

In Old Kingdom Egypt this act was symbolized by the Heb Sed, a ceremony performed every three years requiring the Pharaoh to prove his fitness to continue his rule.

The serpent, Uraeus, in the solar disc is Apohis the serpent encountered in the chaos of the underworld that has become tamed and put under the authority of Ra.

The Sun Eye, as it is commonly called, embodies might and power, fire and light, alertness which had the ability to destroy every enemy. The eye is usually illustrated in the form of a cobra (Uraeus), and usually winged.

As such the Sun is a  force of life and death, mnemonic references carried over to the pharaoh as the living Ra.

The pain of the cobras poison is the fire that burns, irritation that drives the artist to create.