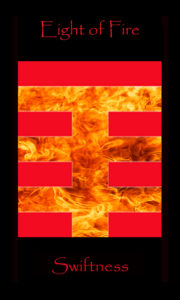 Tarot Eight Fire and each of the Minor Arcana cards numbered Eight express attributes of Hod, the eighth sphere on the QBL Tree of life, whose title is Splendor.

The planetary correspondence of Hod is Mercury and each of the minor arcana cards numbered “Eight” exhibit this astrological body’s quality colored by their corresponding elemental suit of  fire, water, air or earth.

This card is allocated to the first decan of Sagittarius, major arcana card Temperance, whose planetary attribution is Mercury.

The Hod Mercury combination in Fire under the influence of Sagittarius indicates Swiftness.

This swiftness is of high velocity expressing instability unless the card is very well grounded. If the card is well aspected the beneficial impact of Temperance will introduce an influence of steady and gradual heat as is witnessed in disciplines such as alchemy where steady and persistent application is the formula of their philosophy.

Any urgent desire to tackle projects or address issues will run the danger of being unstable. Take time in thinking and speaking prior to acting.

Remember, Sagittarius is ruled by the planet Jupiter that has expansive positive qualities.

Hod and Mercury are indicators of a need for organization and logical thinking whenever we are taken by sudden and spontaneous opportunities leading us towards riding the waves of creative spontaneity.

Our degree of success with this card’s appearance is dependent upon our previous preparatory work that should have developed our ability to optimize this card’s expansive qualities toward our goal.

The attributes, represented by Eight of Fire,  are best suited towards projects that can be achieved quickly. This is because of Eight of Fire’s combustible volatility leading to an explosive disposition making it indicative of actions or situations of.short duration.

All of the Fire Minor Arcana cards express dynamic energy, spontaneity, creativity and suddenness but when negatively aspected can be cruel, violent and overbearing.

The character qualities of the court card Knight of Fire are those best suited to receive and translate the specific ancestral voice of this decan. However, these qualities need to be tempered if they are to be advantageous in accomplishing projects or when interacting with others. There is grave danger here in overreacting. This is because of the Achilles like personality witnessed by this Knight when in environments requiring synergy.

The qualities of Hod, Mercury and Fire illustrate Sagittarian traits which can be directed successfully in communicating with others but there is the danger these can be expressed through spontaneous, sudden and violent behaviour.

In this example of Eight of Fire, the conjunction of major arcana cards Temperance and Magus, corresponding to Sagittarius and Mercury, are the specific signature of this decan and will be projected through the personality type represented by the Knight of Fire. The elemental quality of Knight of Fire corresponds to Fire of Fire. 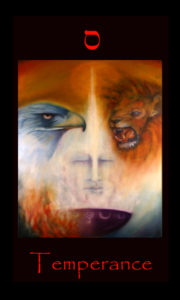 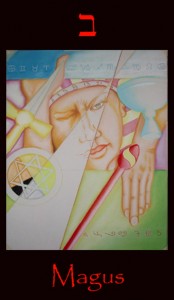