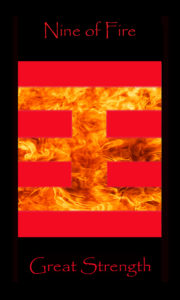 Tarot Nine Fire and each of the Minor Arcana cards numbered Nine express attributes of Ysod, the ninth sphere on the QBL Tree of life, whose title is Foundation.

The planetary correspondence of Ysod is Moon and each of the minor arcana cards numbered “Nine” exhibit this astrological body’s quality colored by their corresponding elemental suit of  fire, water, air or earth.

This card is allocated to the second decan of Sagittarius, major arcana card Temperance, whose planetary attribution is Moon.

The Ysod Moon combination in Fire under the influence of Sagittarius indicates Great Strength.

Tarot Nine Fire represents Great Strength as a result of courage in the face of opposition.

Ysod and Moon are indicators of a firm foundation from which to move forward.

This card is best viewed as presenting an opportunity for a person to grow. It presents the gift of a challenge to overcome resistance to one’s objectives and desires. It is an endowment earned through the practice of magickal technique  giving us the opportunity to grow while imbibing us with awareness to see it as such.

The character qualities of the court card Knight of Fire are those best suited to receive and translate the specific ancestral voice of this decan. However, these qualities need to be tempered if they are to be advantageous in accomplishing projects or when interacting with others. There is grave danger here in appearing to be overbearing . This is because of the autocratic like personality that can be evoked out of this facet of a YSOD Moon Fire combination.

In this example of Nine of Fire, the specific signature of this decan is the conjunction of major arcana cards Temperance and High Priestess, corresponding respectively to Sagittarius and Moon, which project through the personality type represented by Knight of Fire..

The elemental quality of Knight of Fire corresponds to Fire of Fire. 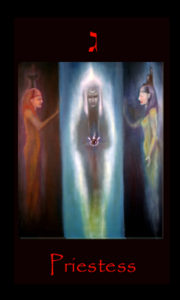 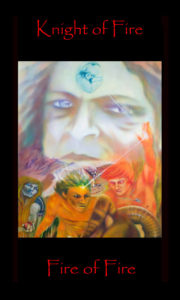