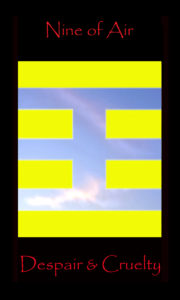 Despair and Cruelty, Mars in Gemini

Tarot Nine of Air, Nine of Swords and each of the Minor Arcana cards numbered nine exhibit qualities of support and justification. This is because nine is the number of Yesod,  the sphere of foundation on the QBL Tree of life.

The planetary quality of Yesod is the Moon and each of the minor arcana cards numbered “Nine” will express qualities of a Lunar nature colored by a card’s elemental suit: fire, water, air and earth and its associated planetary decan. In the case of Nine of Air, this planetary decan is Mars Gemini.

Keep in mind the influence of Yesod is a backdrop to all the other qualities expressed within this card.

Despair and Cruelty, the title of Nine of Air is the second decan of the astrological sign Gemini. This second decan of Gemini is ruled by Mars allocated to the major arcana card Tower.

The effect of the Mars Gemini combination results in expressions of aggressiveness in communication and interaction with others resulting in this card’s title Despair and Cruelty.

Compounded with the quality derived from Yesod’s title “Foundation” we witness an influence that is felt to be both justified and confident in its expression of ideas and values. Because of this feelings of alienation and separation can result from others taking offence at one’s  forceful and belligerent vocalizations of these viewpoints.

Despair and Cruelty owes its title predominantly from the influence of Mars in the Air astrological sign Gemini. This combination results in a rush to express opinions and draw conclusions that are typically expressed in combative, corrosive and uncaring vocabulary. There is also a tendency to be dishonest, flighty, unreliable and superficial. Coupled with this there is an impulsive component to all expressions: a rush to action or judgement. This quality is represented in the Lovers card from Tarot of the Morning Star through the rash action of the hero figure descending to rescue a maiden. In this depiction of the formula the hero is seen to be assuming the maiden to be threatened by a serpent and in his rashness to act he fails to understand the serpent is the maiden’s pet and protector.

Inspiration for this concept is taken from Paolo Uccello’s  painting of Saint George and the Dragon. It is easy to see in Uccello’s painting that the dragon is held on a chain by the maiden

The card also represents sudden changes of directions in thoughts and deeds due to a lack of focus in accomplishing goals and following through with promises. A person acting under the influence of Nine of Air can have insecurities and an edginess to their personality derived primarily from aggressive Mars placement in Gemini

To sum up, Nine of Air represents the foundational qualities of the element: analysis, cutting up taking apart to study and a clinical rather than caring attitude. However, remember there are situations where clinical attitudes work to the positive.

Tarot court card Knight of Air Knight of Swords is the human personality type behind Tarot Nine of Air. Here is a personality image best suited to exploit the appearance of Nine of Air to one’s advantage. Allowing oneself to be guided by the positive traits of this Knight can help counteract the negative influences of Nine of Air

For greater clarification of Nine Air’s impact upon a tarot reading, listen for the specific bicameral voice of the decan triggered by the combination of major arcana cards Lovers corresponding  to Gemini and Tower corresponding to Mars and take note of the message they relay through the personality type represented by the Knight of Air.