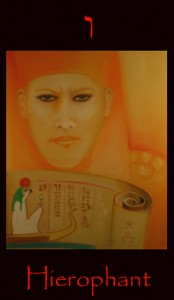 Sensation, Tarot Hierophant represents a quality within ourselves that registers an awareness of phenomenon. It is not the elucidation of the phenomenon but the bringing to our attention that there is something of which we are not cognizant.

Admitting we are uninformed about a subject or situation is our door to  exiting ourselves from the thralldom of what is holding us back. It is the first step to our educating ourselves on how we resolve the influence. Overcoming fear of the dark is our next step on the path to cognition of the paradox. See Tarot Hermit and Tarot Devil

In the foreground of the card the scroll of life unfolds and as it does so the Duat, symbolic of that which is unknown, becomes revealed.  Here is illustrated the meaning behind the card.

The first step to the resolution of any problem can be achieved through introspection and admitting to the sensation this reveals that we do have a problem. This simple statement and the illustration of the unfolding Duat is our key to unlocking the door of what imprisons us, ourselves.

This symbol of the Rose Cross and its color scales is a key to the signatures of energies, gods, spirits, angles and demons, names dependent upon your orientation toward otherworldly phenomena.

This key, it is reputed, opens all doors. It incorporates at its heart the “Path of the Chameleon”.

Hierophant is the archetypal bicameral voice behind Five, Six and Seven Earth.