The split in the pomegranate represents the act of decision and the seeds within the countless once hidden, but now visible, possibilities. Whether accepting the fruit or declining the fruit there will be repercussions. You can only do what you feel is right. There is no right or wrong there is only what works for you. An act of submission is sometimes an act of strength. 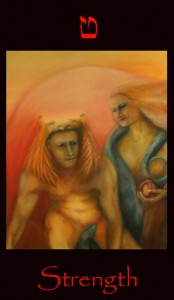 As an example of a bicameral archetype for this card, Achilles is opportune because of his reactionary fixed  automatic responses to phenomena.  We should note however that his character expresses wrath and anger but not hate.

When presented with a phenomena outside of himself, Achilles responds to voices from within himself. He is, to all intense and purposes, a puppet  animated and manipulated by the strings of hallucinating voices of ancestors and Gods.

These automatic responses are recurrent throughout the Iliad. However, when we examine the Odyssey, with its central character of Odysseus, we witness a dramatic change. Odysseus is imaginatively conscious and accountable for his actions.

With  the appearance of the major arcana card Strength, the affects upon the material environment become apparent when examining the minor arcana cards it influences; Five, Six and Seven of Wands, Strife, Victory and Valor respectively. See diagram

Tarot Strength on the QBL Tree of Life

Strength is the only horizontal path on the QBL tree of life, in the Four World Arrangement, that does not resonate with any other. (See diagram 5 in An Introduction to the QBL  The remaining two horizontal paths, Empress and Tower, do resonate with one another and interestingly their planetary attributes are Venus and Mars respectively. This path, Hebrew letter Teth, has the meaning serpent, and connects the spheres Chesed and Geburah, Jupiter and Mars.

Strength is the archetypal  voice behind Five, Sex and Seven of Fire

When failing to interpret these cards in a reading one should allow one’s mind to fall back upon the archetypal image of Strength in gain elucidation to the conundrum.