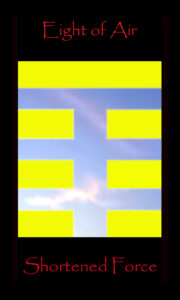 Shortened Force miner arcana tarot Eight of Air, Eight of Swords and each of the Minor Arcana cards numbered eight exhibit qualities of intellectual discrimination between beneficial and disadvantageous outcomes because of taking an action . This is because eight is the number of Hod, the sphere associated with Mercury  on the QBL Tree of life.

The planetary correspondence of Hod is Mercury and each of the minor arcana cards numbered “Eight”, exhibit qualities of this planet colored by their corresponding elemental suit of  fire, water, air or earth. These four suits correspond to the four worlds of the QBL: Fire: Atziluth, Water: Briah, Air: Yetzirah and Earth: Assiah.

Hod has the title of Splendour and with splendour can come complacency due to a false sense of achievement.

Keep in mind the influence of Eight is a backdrop to all the other qualities expressed within this card.

This card is allocated to the first decan of Gemini whose planetary attribution is Jupiter, the planet whose tarot major arcana correspondence is The Wheel.

The combination of Gemini and decan planetary ruler of Jupiter is summed up in the card’s title of Shortened Force.

Jupiter in Gemini illustrates this cards title because the effects of the expansive qualities of Jupiter are being restricted to mundane pursuits. Jupiter requires an environment where it can stretch its potential into new and original concepts and Gemini does not offer this because the sign is concerned with conventional thinking unlike the expansive qualities of Sagittarius.

The appearance of the Eight of Air influences an individual to become absorbed in small matters, to be preoccupied on small projects. Socially the card indicates a persuasion to become petty and small minded while ignoring opportunities to follow more noble pursuits. Here we witness a gossip a nit picking individual who enjoys the pain of others.

Overall the tendency is to over value small things to over analyze and in so doing miss the bigger picture.

In the card Shortened Force we witness the result of a Jupiter Gemini combination under the influence of Air.

The human personality type behind Tarot Eight of Air is Knight of Air, Knight of Swords the Fire aspect of Air. Here is a personality image best suited to exploit the appearance of Eight Air to one’s advantage through evoking and listening to the specific ancestral voice of the decan.

This personality is active, clever, subtle and both fierce and delicate depending on circumstances.

In this example of Eight Air, the conjunction of major arcana cards Lovers and Wheel corresponding to Gemini and Jupiter, are the specific signature of this decan and will be projected through the personality type represented by the Knight of Air whose elemental quality is Fire of Air. 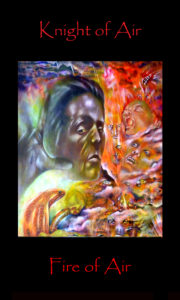