Tarot Two Earth, also called Pentacles, and each of the other minor arcana cards, numbered Two, exhibit qualities ascribed to Chokmah, the second sephirah of the QBL Tree of Life.. Tarot card images for the Minor Arcana cards in Tarot of the Morning Star are binay figures.

The planetary quality of Chokmah is Uranus and each of the minor arcana cards numbered “Two” express a quality of the planet colored by the cards elemental suit: fire, water, air and earth and the planetary decan it rules.

In Astrology, the energies of Uranus are explosive and electric, bringing dramatic change. Uranus is forward-looking. It recoils against tradition, and extols originality and individuality. Uranus is associated with technology, innovation, discovery, and all that is progressive, all attributes of Chokmah.

However, the grounding influence of the Earth suite tempers these explosive qualities of Uranus into Harmonious Change. Here we witness a gentle aspect or face of the planets personality.

The astrological allocation of the decan ruled by Two Earth is Jupiter in Capricorn which introduces benevolent influences that counterbalance the Uranian influence.

Being the first decan of Capricorn the card displays conservative qualities, qualities required for transitioning this period of one’s journey.

A human archetype is that of benefactor who’s sense of philanthropy is achieved through conservative and established channels.

However, we need to be aware the Archetypal influence behind this card is Devil.

Take time to re-evaluate societies values and your own upbringing on concepts of God and Devil. Two of Earth, Two Pentacles illustrates an energy of subtle and harmonious change. The correspondence of Capricorn to Devil illustrates this an introspective time of the year, winter. A period of incubation or realigning our thoughts and beliefs.

The appearance of Two Earth in a tarot reading can be read as subtle change, either from within or without. The personality qualities and life experiences of the Queen of Earth are those required to translate the enigma of the cards appearance. If we have not yet learned or experienced those qualities, then our attention is drawn to archetypal major arcana card Devil.

In this example of Two of Earth, the conjunction of major arcana cards Devil and Wheel, corresponding to Capricorn and Jupiter is the specific signature of this decan and will be projected through the personality type represented by the Queen of Earth. The elemental quality of Queen of Earth corresponds to Water of Earth. 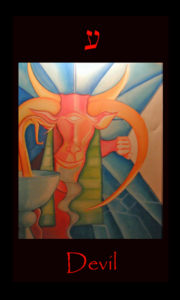 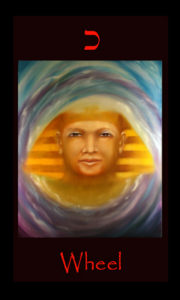