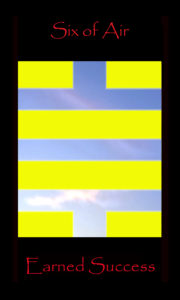 Tarot Six  Air, Six Swords and each of the Minor Arcana cards numbered “Six” express attributes of Tiphareth, the sixth sphere corresponding with Sun on the QBL Tree of life, whose title is Beauty.

The planetary correspondence of Tiphareth is Sol and each of the minor arcana cards numbered “Six” exhibit this astrological body’s quality colored by their corresponding elemental suit of  fire, water, air or earth. These four suits correspond to the four worlds of the QBL: Fire: Atziluth Water: Briah Air: Yetzirah and Earth: Assiah.

This card is allocated to the second decan of Aquarius whose planetary attribution is Mercury.  The combination of Tiphareth, Sun and the decan planetary attribute of Mercury is summed up by the card’s title of Earned Success.

Pleasure the title of Six  Air, the second decan of the astrological sign of Scorpio.  The Sun/Scorpio combination evokes an influence of deep sensuality, resulting in the condition of Pleasure.

Here we witness triumphing over forces antagonistic to the achievement of objectives but are these triumphs at the deliberate expense of others? The card does not answer this but surrounding cards that influence it will.

The astrological sign of Scorpio is what brings deep sensual passionate pleasure that comes from giving birth, whether as physical childbirth or artistic creative breakthrough to the interpretation of this card. It causes one’s whole life to be split and opened up, changed forever through the expression of Scorpios ruler Mars.

In addition, Tiphareth’s title of Beauty indicates that all is aligned for a successful and beneficial result in initiating projects.  Note that the binary code of this card is the same value when the card is inverted. This is true for all Minor Arcana cards numbered “Six”.

Scorpio introduces attributes of cunning and subterfuge directed to achieving  one’s objectives at any cost, causing conflict through self assumption.

A similar influence is witnessed by the appearance of Five of Fire/ Five of Wands but in that case the force is instinctive reaction to phenomena that is less subtle being abrupt and maybe even brutal.

The character qualities of the court card Prince of Water are those best suited to receive and translate the specific ancestral voice of this decan.

This Prince expresses a calm outward personality but has a fierce nature. However, the qualities of Tiphareth and the double Sun combination will detract from his more brutal aspects. Although expressing qualities of self serving ambition, the influence of Tiphareth and the Sun offers the possibility of redemption. This is paramount for ensuring the negative qualities of the card do not run out of control, resulting in irreversible situations.

See the major arcana card Sun whose attribute is the Sun.

There are  analytical and calculating components to this personality because the personality corresponds to Air of Water. These can be vicious in verbal campaigns against opponents. However, whatever this individual’s motives, they will always execute them with a smile.

In our failure to understand what any Minor Arcana card is saying, we should allow ourselves to be driven back to our specific inner voice of the decan for resolution.

.In this example of Six  Air, the conjunction of Major Arcana cards Death and Sun, corresponding to Scorpio and Sun, are the specific signature of this decan and will be projected through the personality type represented by the Prince of Water. The Prince of Water’s elemental quality  corresponds to Air of Water.  Each of the elemental Prince court cards correspond to the Air aspect of their elemental suit. 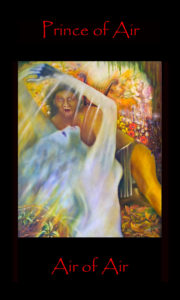