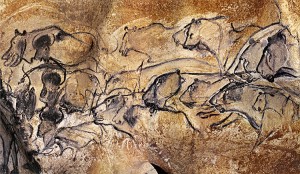 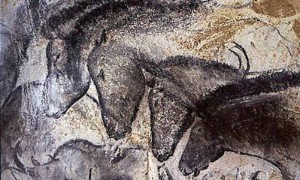 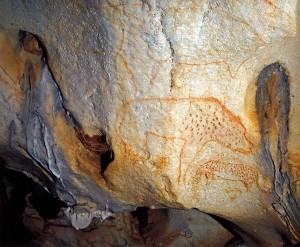 If one makes only a rudimentary study of prehistoric cave paintings, it is immediately apparent the majority of them we know of, such as those found on the island of Sulawesi in Indonesia at Cueva de El Castillo in Spain and Chauvet-Pont-d’Arc Cave in France, are always created in the most inaccessible and dark locations.

Although the majority of the pictures depict herds of animals, research shows there is little evidence to prove any of these images were produced for success in hunting, because in most instances the animals illustrated were not part of the diet of the people of that period[1].  This is particularly evident at Chauvet-Pont-d’Arc Cave; nor, is there evidence to prove their creation for religious or initiatory functions.  We are therefore left to ponder on why they should have been created hidden from public view, unless it was that a creative imaginative act, the conscious ability to recreate and record observed images of nature, was perceived to be an abjuration by other members of the artist’s society[2].

So, were the creators of these fantastic artworks, whose images speak out to us in a language understandable in the present day, demonstrated by the fact that thousands of years after their installation they have influenced artists close to our own time, such as Picasso, were created by individuals who could have been persecuted for their artistic gifts?

This can be seen time and time again through human history when ever humanity congregates together; we will single out and attempt to exterminate that which is unique or different.

Is it possible that thousands of years ago the imaginative creative act was observed by those without it as an abnormality?  In the same way, imaginative scientific minds in the European Middle Ages were classed as heretics and those advocating equally out of the box ideas are judged and written off as cranks today.

Are we witnessing, in the execution of the paintings, our ancient ancestors becoming modern man through a newly developed faculty, dreaming, leading to introspection and shamanic experience?

Was the act of painting 30 to 40 thousand years ago witnessed by the societies of those times as something alien or unwholesome?

All of us have stared at clouds and experienced the phenomena of images created by our imaginations materializing.  The undulating lines and coloring of the cave walls worked in the same way on our ancestor’s imaginations just as does staring at clouds or for that matter anything without definite pattern.  When this occurs the human mind will create images or ideas out of what it conceives as chaotic.

After reading the previous statement, one can understand the reason for the development of divination which was and is an attempt to put order into what appears to be a chaotic universe.  We should consider this might also have been the motivation or unconscious impetus in creating the paintings.

It is this evocation of the inner world called up into visible appearance in the outer that is the Promethean gift, fire of imagination, the God principle of creating one’s own universe.  This explains why traditional images of gods generally appear to be replications of the people who worship them; we create our gods in our own image.

Research seems to indicate that almost simultaneously this phenomenon of cave painting occurs on a global scale in accord with the theory of “the one hundredth monkey effect[3] which has concepts resonating with Rupert Sheldrake’s morphic field theory[4].

[1] Later period paintings do depict images of hunters with bows and arrows and spears.

[2]  It is not unusual for persecuted people to meet in secret hidden places.

[3] A theory that behavior or ideas are spread rapidly by mysterious function from one group to other related groups once a critical number of members of one group exhibit the new behavior or acknowledge the new idea.

[4] Morphic resonance theory proposes that memory is inherent in nature and natural systems, such as termite colonies, orchid plants, or insulin molecules, that a collective memory is exhibited from all previous things of their kind”. Sheldrake suggests that it is also responsible for “telepathy-type interconnections between organisms”.

Don’s Maps: Resources for the study of Palaeolithic Archeology/Chauvet Cave