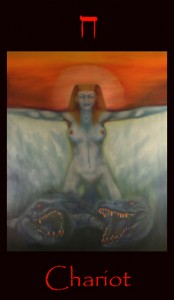 Tarot Key Chariot depicts a triumphant individual who has harnessed learned abilities and experiences to courageously impel themselves into the pursuit of achieving their aspirations.

This is not saying their projects will be successful; it is saying the individual has courage to try. Triumphant implies the person has conquered their fears to be able to attempt an enterprise. Tarot key Moon is the path travelled where fears, fuelled from previous unconscious actions, tarot key Death, are conquered.

This individual is capable to attempt an enterprise because of past experiences, some successful and some not. We should remember, it is not the result that is important; it is the act of trying that is paramount.

Such a person symbolized by the Chariot does not automatically react to outside stimuli but takes the time to inwardly reflect on the repercussions of action. This is a dramatic about turn from what is witnessed in tarot key Death. Death, where the primal ruthless individual reacts unconsciously to events with no sense of accountability for actions taken.

The three Major Arcana keys associated with the element of water, Death, Moon and Chariot illustrate an individual’s emotional progression from unconscious reaction to stimuli to a conscious awareness of taking action and the possible consequences.

For more elucidation on the personality traits correlating with the keys, Death, Moon and Chariot refer to tarot court cards, Prince of Cups, Princess of Cups and Knight of Cups.