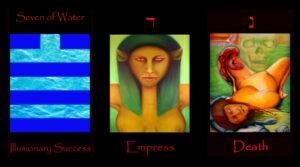 Tarot third decan Scorpio corresponds to Seven Water, Cups and each of the Minor Arcana cards numbered Seven express attributes of Netzach, the seventh sphere on the QBL Tree of life, whose title is Victory.

The planetary correspondence of Netzach is Venus and each of the minor arcana cards numbered “Seven” exhibit this astrological body’s quality colored by their corresponding elemental suit of  fire, water, air or earth.

These four suits correspond to the four worlds of the QBL: Fire: Atziluth Water: Briah Air: Yetzirah and Earth: Assiah.

This card 7 Water is allocated to the third decan of Scorpio whose planetary attribution is Venus.

The combination of Netzach, Scorpio and the decan planetary attribute Venus is summed up by the card’s title of Illusionary Success.

The Netzach Venus combination in Water under the auspice of Scorpio indicates Illusionary Success. Strong desire for success deludes an individual into believing goals have been achieved when they are still locked in the imaginary phase.

Here we witness the deceptive drive of Scorpio acting upon the qualities of Venus, which can lead to self-indulgence and dissipation resulting in chicanery in relationships. We are in danger of error and deception with promises unfulfilled through lack of energy.

Netzach’s title of Victory would have us believe that all is aligned for a successful and beneficial initiation of projects. However, victory is seldom achieved with the appearance of this card. There might be slight success at the beginning of projects but there is a distinct lack of follow-through because of supine qualities.

As with each of the Minor Arcana cards Five, Six and Seven of Water, Scorpio introduces attributes of cunning and subterfuge with a strong sexual component.

The character qualities of the court card Knight of Fire are those best suited to receive and translate the specific ancestral voice of this decan.

This Knight expresses a Prometheus-like personality witnessed by his eruptive nature. However, the qualities of Netzach, Venus and Water illustrate that Scorpio traits can be directed in assisting others but that these qualities may be expressed through sudden and violent behaviour .

Ill dignified Knight of Fire can be cruel and evil minded.

In this example of Seven of Water, Seven of Cups the conjunction of major arcana cards Death and Empress, corresponding to Scorpio and Venus, are the specific signature of this decan and will be projected through the personality type represented by the Knight of Fire. The elemental quality of Knight of Fire corresponds to Fire of Fire. 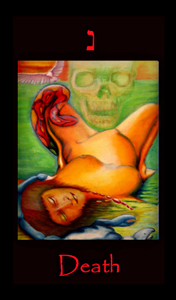 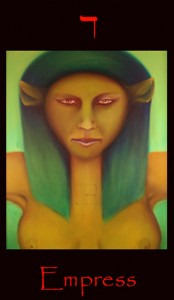 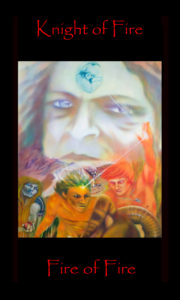