Tarot Chariot is a pictograph illustrating the inundation of the river Nile, and this event’s impact upon the natural world.

These observations of natural phenomena are translated through the card’s image to inform us of the possible impact of unleashing energies, originating from life experiences , and the positive and negative aspects of being swept along by them.

The interpretation of the  Chariot in a tarot reading is an illustration of  overcoming obstacles, recovery and success although this may be only temporary.

The degree and duration of success will depend upon the amount of work we have done to prepare ourselves for new life situations that our enthusiasm for life has created for us.

Chariot is an illustration of a triumphant individual who has harnessed learned abilities and experiences to courageously impel themselves into the pursuit of achieving their aspirations.

This is not saying their projects will be successful; it is saying the individual has courage to try. Triumphant implies the person has conquered their fears enabling them to accept opportunities when confronted with them.

This individual goes with the flow naturally riding waves of opportunity when presented with them. Accepting enterprise through unconsciously drawing upon past experiences, some successful and some not. We should remember, it is not the result that is important; it is the act of trying that is paramount.

Such a person empowered by the Chariot automatically responds to outside stimuli derived from subliminal  knowledge gained by previous experiences. Taking the reins of opportunity and driven by enthusiasm, Fire of Water, while inwardly reflecting on the repercussions of action these individuals are provided with a formula for success to overcome obstacles..

The three Major Arcana keys associated with the element of water; Death, Moon and Chariot illustrate an individual’s emotional progression from unconscious reaction to stimuli to a conscious awareness of taking action and the possible consequences.

Major Arcana card Chariot is the archetypal voice behind the Minor Arcana cards Two, Three and Four of Water, Cups.

¹This event is traditionally announced by the conjunction of the Sun and Sirius. 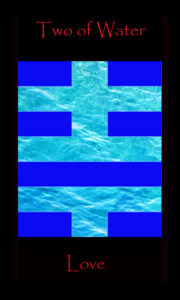 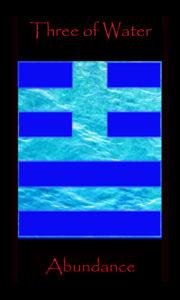 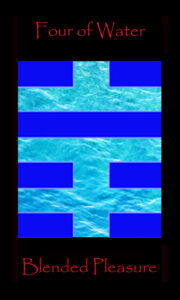 Tarot of the Morning Star Deck reprinted and available from Amazon

Born in Loughborough, England, in 1947 and growing up in Coventry he was inspired from an early age by the French Symbolist painters of late nineteenth century France,

These artistic influences, in conjunction with his own esoteric upbringing and practical experiences of mythology and dream control, form the matrix, a collective oeuvre upon which his paintings and writings are an extension.

Using diverse creative media, whether  painting or writing books, Williamson endeavors to develop techniques that materialize the sensuous dreaming experience into the language of the waking world.  Aspiring to reintroduce mystery and ambiguity back into the adventure of human existence through the creative process, encouraging artistic audiences towards “living effulgent and invigorating lives, revitalized from the secretions of our subconscious.”

Roger Williamson Art  is the creator of Tarot of the Morning Star deck and the author of The Sun at Night.